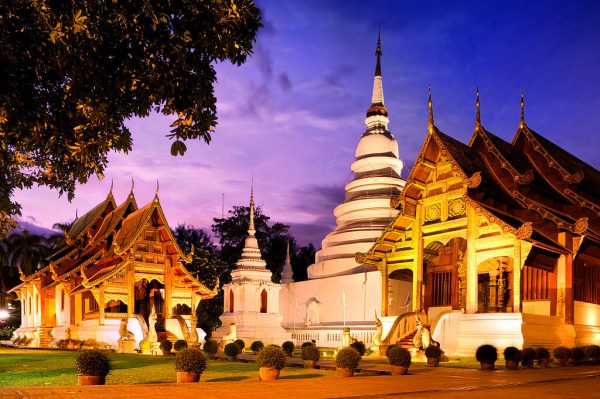 Chiang Mai lies in the north of the capital and has been accepted by many as a more peaceful and less chaotic place that Bangkok, Thailand’s northern capital. From monks donning orange robes in the old city’s numerous temples, the diverse cultural festivals and markets punctuating the night, sprawled over large swathes of land, there are several reasons why millions visit this old region of Thailand

In Pai you are availed luxuriant landscapes with swathes of rolling hills and a wonderful people in the Lanna, friendly in welcoming the vast numbers of backpackers that visit its hidden secrets of nature.

Chiang Mai is blessed with cool weather and is best visited on the weekend with its bustling activities some of the most popular of which is zip lining and trekking.

This region of Thailand oozes culture alongside a wide variety of cheap shopping avenues and options such as cafes and restaurants energized by a lively atmosphere of activities.

The temples are a historical buffet for those interested in exploring the true depths of Thailand’s culture. Truly this is a nation blessed both culturally and naturally. More importantly it is the sort of vacation least likely to break one’s wallet.

The best time to visit Chang Mai would be in February and November. Because during these months the weather is cooler and at its best. Also there’s less tourists during these months, because it is outside of the peak tourist season.